I haven't been blogging because I haven't felt like there's anything blog-worthy going on in our lives right now. You're not interested in the daily blah happening around our house. Or...are you? One of the most popular sitcoms ever created was Seinfeld, a show about nothing. Maybe my blog will become as award winning as that TV show. Who needs Jerry, Elaine, George and Kramer when you've got Dan, Ang, Jake and Ty? The blog about nothing. Hmm, intriguing.
If our life was a sitcom, here's what our script might look like:

It's a typical Thursday morning. Ty stumbles into Dan and Ang's room at 5:30am, sobbing that he's afraid a bad dream is going to come and that he is sick and needs some medicine. Ang stumbles out of bed tripping over clean, but yet-to-be-put-away laundry on her floor and almost decapitates herself on her dresser. Ang walks Ty back into his room where Jake lay snoring, 1/2 his body on his own mattress and 1/2 on Ty's. Ang sits on the floor next to Ty's bed and pats him on the back until his whimpering subsides. She closes her eyes for just a moment, waking up 15 minutes later to the combination of a stiff neck and a right arm that has fallen asleep behind her head which makes her ponder, through her delirium, chopping her painfully tingling extremity off so she can go back to sleep as soon as possible. She crawls back to her bed and falls asleep 5 seconds before Dan's alarm goes off.

Dan gets up and gets ready for work while Ang tosses and turns, completely in awe of how tired she is and yet she still cannot fall back to sleep. She finally nods off again 4 seconds before her alarm goes off, which means her typical alarm clocks (Jake and Ty) are sleeping in. Ang hits her snooze button (anybody heard the comic Gary Gulman on snooze buttons? "9 minutes? 9 minutes is not a snooze...90 minutes, that's a snooze. Honestly, have you ever woken up from the 9 minutes refreshed? The 9 was all I needed, 10 minutes would have been overkill, I would have been groggy.") On any other day the kids sleeping in would be spectacular, but today is a preschool day. This doesn't compute with Ang until she hits her snooze button for the third time. Then she jumps out of bed and realizes they need to leave the house in 15 minutes.

Flurry of activity, including Ang getting breakfast for 2 cranky kids, dressing them as they eat their cereal, and trying to find Jake's backpack and lunch bag to pack a nutritious snack for him to take to school. As Ang is putting Jake's shirt over his head while he takes another "humungo" bite of cereal she sees a bald spot on his head which coincidentally is the same location Ty whacked him on the head with a toy a month ago causing blood to spurt forth. 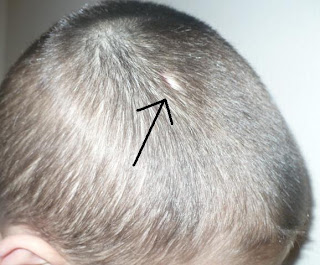 Jake and Ty fight over who gets to push the garage door opener as Ang grabs 3 jackets, Jake's backpack with Go-Gurt and Juicy Juice tucked safely inside, and her purse and stares longingly at the empty coffee pot. A full blown wrestling match has broken out in the garage and Ang ends up pushing the garage door opener herself which focuses all preschooler/toddler anger in her direction. Ty opens the drivers side door and proceeds to take 2 minutes to get into the backseat and sit down like a normal human being in his car seat so Ang can buckle him in. Ang turns off the overhead light, the flashers, the windshield wipers, turns the radio volume down and pushes closed the cup holders Ty has messed with and searches for her keys. Ang groans loudly realizing her keys are not in her purse, but laying right next to where her purse was on the kitchen counter. Ang runs up the garage stairs to the kitchen and vows that today is the day she'll start an exercise routine...after she takes a 90 minute snooze.

Ang finally starts the drive to preschool, pulling out of her street directly behind a school bus which stops about every 6 or 7 feet to pick up more children. There are only 3 stoplights between the Stump house and preschool, but every one of them promptly turns red when Ang drives up. Finally pulling in to preschool, Ang finds the closest parking spot. Jake gets angry and Ty starts weeping because they're not parked directly next to Mrs. Weber's white Chevy Venture minivan. Ang reminds Jake to be a good kid today as she's reminding Ty it's time to get out of the car. Ty crawls out of his car seat and into the front seat to begin his exit routine. A torrential downpour begins as Ang realizes the jacket she brought for herself doesn't have a hood. Ang repeats the words, "Get out of the car, please Ty" between 8-15 times while Jake is literally pulling on her leg. "We're LATE, Mom." Ang closes her eyes and counts to 10 while Ty starts to hyperventilate because he can't get his jacket hood onto his head properly. Ang vows that today is the day to start anger management classes. 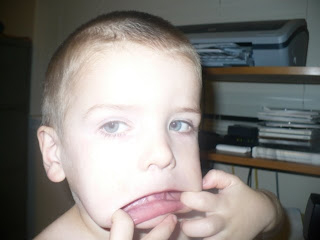 Ty makes it out of the car and onto Ang's hip and they run inside to drop Jake off into a half day of finger/sleeves-up-to-the-elbow painting and getting in trouble at recess. Direct quotation from Jake to his teacher, "Mrs. Weber, if you keep yelling at me, I probably won't come back to preschool." Ang is assured by Mrs. Weber that she was NOT yelling, and that she won't be devastated if Jake never returns. (A parent-teacher conference held later put Ang and Dan's minds at ease, that their child is not nearly the biggest trouble maker in that class. And encourages them to be praying daily for poor Mrs. Weber.) 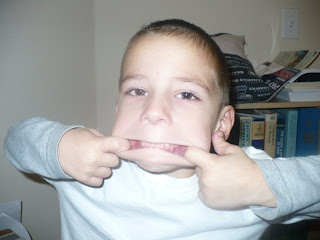 When Jake is at preschool, Ang and Ty run errands...Starbucks, the Dollar Tree, Fred Meyer, Walmart, Winco, a different Starbucks, and return home in enough time to put the groceries away and clean up the bomb that was breakfast while Ty watches part of the Elmo DVD that Ang can recite from memory. Time to return to preschool to pick up Jake.
Lunch time, wipe Ty down from head to toe and attempt naptime which he has been rejecting for the last few days. Ang sets Jake up on the computer on pbskids.org and barricades Ty's door so he won't be able to get out even if he doesn't sleep. Then Ang climbs into a hot shower and doesn't come out for hours.
Jake insists on playing Mario Cart on the Wii, and Ang fine tunes her skills enough to get first place on Rainbow Road, which is by far the hardest course. Ang is feeling pretty good about herself until she realizes it's 3:45 and they have to leave by 4pm to get to Dan's basketball game. Ang says out loud to herself, "I can NOT believe I'm waking up my child from a nap that he's been fighting for 3 days," and then she does just that.
Oh my gosh, are you still reading this? I'm just going to stop right there, for both of our sakes. Thanksgiving is coming, yummy food and lots of great family time. Auntie Jane and Uncle Curti and our adorable new baby niece we've never held are coming on MONDAY! We have a lot more excitement coming your way, I promise. Soon, Marla. Soon.
Posted by ang at 1:24 PM

Ang - I love this post...you may not think it's interesting, but I find it VERY interesting! Your posts always make me laugh and amazed at how you do it all!

Oh my gosh, yes. I was still reading that. Great play-by-play. And it would not be nearly so funny if it did not remind me of days I have had.

That was one of the best blog posts I have ever read in my life.

And I'm not even joking.

I'm sending some of my blog-readers over your way. This post was too good not to share.

And this excitement you have coming your way...do you have an announcement?

I seriously just laughed - out loud - by myself - through that whole thing. Mainly because my 2-and-a-half-year-old Oliver sounds like Ty in most of this post, and I was just painfully relating to much of your story. Ugh. Thanks for posting, and Happy Thanksgiving!
~Joy

I was still reading. When will episode 2 be written? Melanie

ang
Dan and Angela Stump. Happily married since July 20, 2001. Happily Daddy and Mommy since August 3, 2004 when Jake arrived, and again when little brother Ty joined us on March 10, 2006. Seeking to love God and love each other more every day.